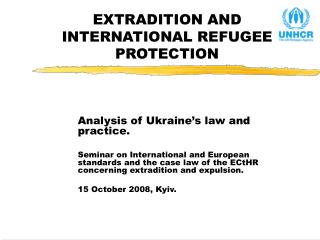 EXTRADITION AND INTERNATIONAL REFUGEE PROTECTION. Analysis of Ukraine’s law and practice. Seminar on International and European standards and the case law of the ECtHR concerning extradition and expulsion. 15 October 2008, Kyiv. INTERPLAY OF TWO PROCEDURES: GENERAL PRINCIPLES. Refugee Protection Division - . navigating the sea of change – refugee lawyers group cle 2013. what is new at the rpd

REFUGEE PROTECTION &amp; MIXED MIGRATION - . while refugees and asylum seekers account for only a small proportion of

IMMIGRATION AND REFUGEE BOARD OF CANADA CANADA’S REFUGEE PROTECTION HEARING PROCESS - . workshop on protection and

Module 1: What Is Refugee Protection - Objectives. identify the international standards that form the framework for the

“Retaking” vs. “Extradition” - . offender application for transfer (waiver of extradition) must be signed prior

International Trademark Protection - . william fisher june 25, 2004 many of the slides in this presentation were prepared