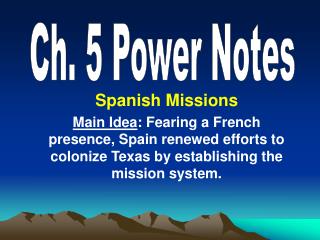 Spanish Missions in Texas - . summary so far. europe eyes the americas. columbus came to the new world looking for gold

Spanish missions and forts - . what life was like living in a mission. major goal. the major goal of missions was to help

Life in Spanish Missions - . missions. the mission was spain’s main tool for colonizing texas. in the missions the

Spanish California and the Missions - . coming of the europeans. a memorial to estanislao , as an armed warrior, modesto,

The Spanish Missions Section 3: The Spanish Return to Texas - . bellwork. why did the spanish missions in east texas

LIFE in the SPANISH MISSIONS and PRESIDIOS - . the spanish texans. spanish colonists came to texas… to escape cruel

Missions - . first missions in texas. friars in 1682 founded the first permanent settlement of europeans in texas—the