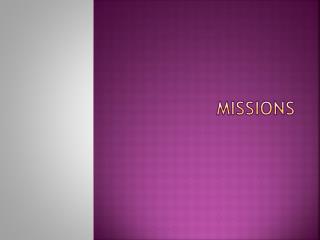 Missions. First missions in Texas. Friars in 1682 founded the first permanent settlement of Europeans in Texas—the mission of Corpus Christi de la Ysleta—located near present-day El Paso. Most Spanish activity during the 1690s was in east Texas, near French Louisiana. CALIFORNIA MISSIONS - . by aurora schuck. san carlos borromeo de carmelo. .this mission was found by the father of all

Space Missions - . finding a way to coexist in the future. space missions. * early rockets were used to launch astronauts

ARGENTINA MISSIONS - . “every man has more right to hear the gospel once, than any man has to hear it twice.”. avon

Understanding Missions - . the biblical rationale for taking the gospel to the ends of the earth the master’s mission.

California Missions - . by mrs. nolan. there are 21 missions in california.

California Missions - . by marilyn kowsari october 12, 2007. what was a mission?. a religious settlement. location of the

Missions Preparation - . what is missions?. we must define missions before we can become missional . if everything is