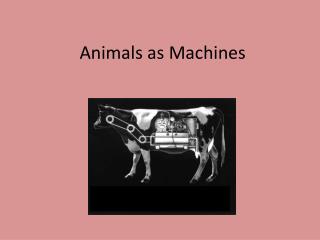 Small animals as pets - . objectives. list the questions a person should ask before buying a pet. compare the different

Animals as we see them - . where do they live?. at home. in wild life. in the circus. on a farm. in the zoo. animals in

Digital Games as Empathy Machines - - Can we support empathy, compassion, and perspective-taking skills through

Ch. 5 Domesticated Animals as Citizens - . defend the claim that the appropriate way to recognizes the incorporation of

Enzymes as machines: how they work - . biophysical society summer course 27 june 2013 charlie carter. they are just as

Animals as Living Things Vocabulary Grade 4 - . an animal with a backbone is called a vertebrate. a bird is a vertebrate.

How Do Animals Change as They Grow? - . the learner will:. recognize that as an organism grows, its appearance may

ANIMALS - By: christian with a little help from mom weddel seals weddel seals have 34 different calls. they can be heard

Animals - . what is an animal? . multicellular heterotrophs carnivores, herbivores, or omnivores some are vertebrates,