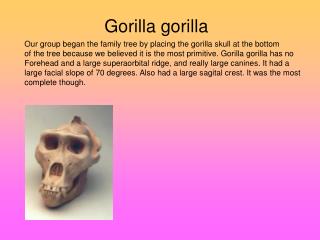 Gorilla gorilla. Our group began the family tree by placing the gorilla skull at the bottom of the tree because we believed it is the most primitive. Gorilla gorilla has no Forehead and a large superaorbital ridge, and really large canines. It had a Gorilla - . created by chris blum june 2010. introduction. you were in the forest taking photos when you heard a crunch,

Gorilla - . milo duebendorfer. biotic or abiotic. a gorilla is biotic because it reproduces and

Gorilla - . griffin. description. detail 1 : the gorilla has black fur and it also has a big nose, and big feet. detail 2

Gorilla - . by emma. i ntro. everyone loves the funny, interesting gorilla. i n this report you will learn about the

Gorilla - . by savannah. habitat. gorillas live in eastern zaire biome-mountain type of home- they make a nest in trees.

Gorilla - . by: thai wark. introduction. imagine being a gorilla. y ou would be eating all day. s o stop eating and lets

Gorilla Strategy - . jay rao professor. gorillas tend to cover the full market spectrum!. what is the meaning of full

Mountain Gorilla - . introduction. today you will learn about mountain gorillas. they are amazing. that’s why im

Gorilla /Guerrilla - . gorilla – animal in the ape family she loves the gorilla exhibit at the zoo. guerrilla –