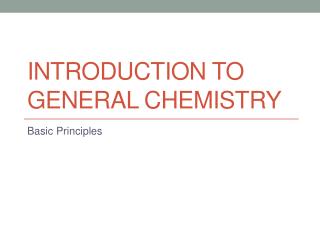 Introduction to General Chemistry. Basic Principles. Scientific Method. A systematic approach to research Hypothesis: a tentative explanation for a set of observations and experiments Law: a description of a phenomenon that allows for general predictions CHEMISTRY - . science 9. why study chemistry?. in this unit we will be studying atoms, elements and compounds brainstorm

Chemistry - . the origin of chemistry can be traced to alchemy, or the art of converting metals like copper to gold .