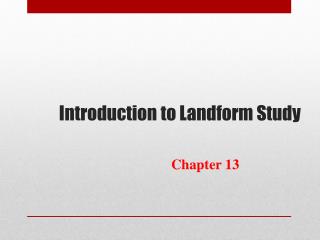 Introduction to Landform Study. Chapter 13. The Structure of the Earth. Four Regions The Crust The Mantle The Outer Core The Inner Core. The Crust. The outermost shell, consists of a broad mixture of rock types Average thickness averages 3 miles , Chapter 13: Introduction to Landform Study - . the structure of earth. understanding of earth’s structure based on

Landform Overview - . a narrow strip of land connecting two larger areas of land - isthmus. a flat area of land that is

Landform Activity - . for review. #1 a rock heats in the sun and cracks. destructive weathering. #2 a slowing stream

Landform Regions - . physical geography of canada. overview. “regions” is a concept that we use to help organize

landform Dictionary - . by: justin prickett a nd megan mullins . bay. a body of water forming an indentation of the

Landform Quiz - . created by alecia carter. what’s the landform? is it a. mountain coast plain plateau. if you

C2- landform - . ms. leung. focus. we have been looking at how things change the earth. from inside the earth (the

Landform Jeopardy - . basin. a topographic region in which all water drains to a common area; a watershed. valley. a

Canadian Landform Regions - . landforms. -&gt; landforms are the topography , or natural features, of the land's

INTRODUCTION TO CASE STUDY - . harvard style of referencing. overview. what is referencing? why should you reference?

1) A study of one landform on the Irish landscape formed by the geomorphic processes - . coastal study: beach. make