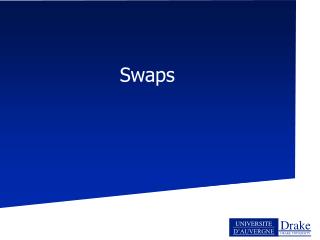 Swaps. Introduction. An agreement between two parties to exchange cash flows in the future. The agreement specifies the dates that the cash flows are to be paid and the way that they are to be calculated. Swaps - . definitions. in a swap, two counterparties agree to a contractual arrangement where in they agree to exchange

Interest Rate Swaps Blackwell, et al, chapter 13 and other materials - . swaps. a swap is an agreement to exchange cash

Swaps - . fx swap. the spot purchase and forward sale of currency. the two transactions are executed simultaneously and