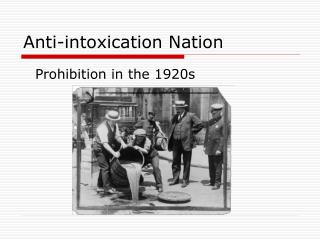 How Alcohol Addiction Can Destroy Lives - Alcohol addiction is a major problem in the uk. the global recession has led to

Intoxication - . february 9, 2010. the issues. the distinction between general and specific intent the burden on the

Dave Hookway Health Promotion Advisor Alcohol and other drugs - . alcohol and pregnancy. why is drinking alcohol a

Intoxication - . a defence where the defendant has consumed alcohol, drugs or other substances. intoxication.

Prohibition in Canada in the 1920s - . by emma carvish and valeriya mordvinova. overview. “an attempt to forbid by law

COMMAND AND PROHIBITION - . we use command and prohibition in our daily conversation, it also can be practiced when we

Citizenship in the Nation MERIT BADGE PROGRAM - . an exploration in the government of the united states. is everyone