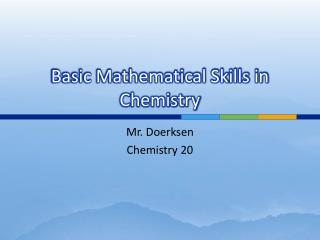 Basic Mathematical Skills in Chemistry. Mr. Doerksen Chemistry 20. Chemistry is Math!. In chemistry, we have to do a lot of math. None of the math is super complicated, but it is important that you learn some basic rules that we will use for the next two Semester in chemistry courses. BASIC CHEMISTRY - . definition of concepts . matter and energy. matter. is anything that occupies space and has mass the

Chemistry The Science in Context Chapter 15 Chemical Equilibrium - . climate models are a system of differential