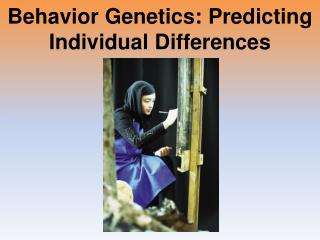 The History of Behavior Genetics - . how nature affects our genetics and how our genetics change how we perceive and

Considering Individual Differences - . one way to account for individual differences is to modify the events of

Animal Genetics - . introduction to genetics. what is genetics?. the science of heredity genetics has also been described

Nature, Nurture, and Human Diversity - . chapter 3. behavior genetics. so how do we separate out gene and environmental

Genetics and Behavior - . with reference to relevant research studies, to what extent does genetic inheritance influence

2.2 To what extent does genetics influence behavior? - . back up your response with research. behavioral genetics.

Genetics is the study of the Mapping Between Phenotype and Genotype - . phenotype: physical state of an individual, i.e.,