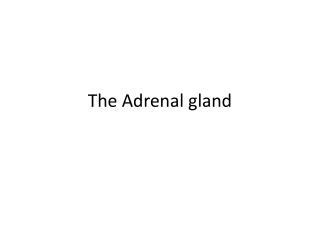 The Adrenal gland. I. Adrerenocortical Hyperfunction ( Hyperadrenalism ) 1. Hypercortisolism (Cushing Syndrome) - In clinical practice, most cases are caused by the administration of exogenous glucocorticoids (Iatrogenic) Adrenal Gland - . adrenal gland. anatomy was first described in 1563. is located above (or attached to) the upper pole of

Adrenal Gland (Medulla) - . our names are palmer and jason we are in anatomy in 7 th period with mrs. bertsch , on b