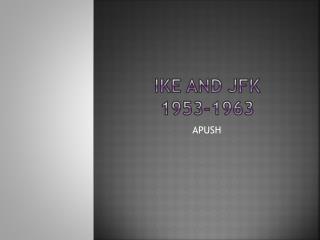 Ike and JFK 1953-1963. APUSH. Ike’s Foreign Policy. 1. What did Ike do about the Korean War?. Korean War 1950-1953. Negotiations with North Korea stalled over issue of Chinese and North Korean POWs Ike hints at possible attacks if negotiations don’t continue Chapter 6: DNA Replication and Telomere Maintenance - . it has not escaped our notice that the specific pairing we have

1953: The structure of the DNA molecule is first described. - As you can see from the model, the structure is basically a

APUSH - . bell work…. the convention. bell work questions. 1.what were some of the events that led the new united

BRIEF BACKGROUND ON THE GPH-CPP/NPA/NDF PEACE NEGOTIATIONS - . insurgency problem has been with us for 42 years

Edwin Powell Hubble (1889–1953 ) - . a presentation by nathaniel ross and victoria stewart. a brief biography of edwin