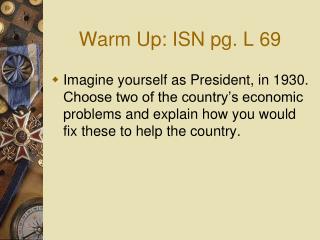 Warm Up: ISN pg. L 69. Imagine yourself as President, in 1930. Choose two of the country’s economic problems and explain how you would fix these to help the country. FDR and The New Deal. FDR runs against President Hoover in 1932. Warm Up - . zach kindler mackie valentin. what will be covered . purpose of warm up the wildcat way developing a warm up

WARM UP AND WARM DOWN - . a warm up starts with light exercise then stretching to: reduce the risk of injury prepare the

1st Day: Warm Up (IN) - Warm ups are done individually and quietly in your desk. warm up time is usually 5-7 minutes and

Warm-ups - . warm up #1: find the circumference and the area of a circle with a radius of 10. k eep in pie form. warm up

Warm Ups - . use charts and diagrams to answer 1-10 there will be warm up check after finishing 1-10 complete 6 kenken

Warm Up #1 - . what is the first thing you think about when someone says “childhood” and why?. warm up #2. in order

WARM-UP - . complete the tree map exercise and glue it into your warm-up notebook have your homework out on duties and

Warm Up 16: - . what are some things that make earth unique? what is ecology?. warm up 17. describe what you see on this

WARM UP AND WARM DOWN - . a warm up starts with light exercise then stretching to: reduce the risk of injury prepare the