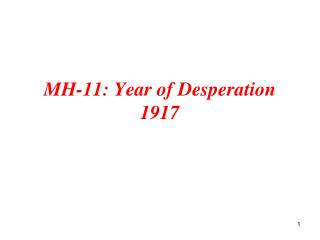 Desperation - . desperate to be heard or noticed. introduction. welcome definition of desperate: having an urgent need or

The October Revolution of 1917: Russia goes Commie! - . election results in russia november 1917 for the constitutional

Russia 1917-24 - . revision session 2. you have 4 minutes to answer the following question: explain why there was so much

World War I Quiz Review - . when: wwi began in june of 1914 the united states didn’t enter the ww i until april of