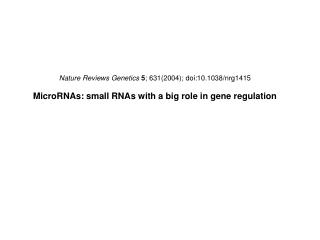 Nature Reviews Genetics 5 ; 631(2004); doi:10.1038/nrg1415 MicroRNAs: small RNAs with a big role in gene regulation. Figure 2 |  The current model for the biogenesis and post-transcriptional suppression of microRNAs and small interfering RNAs. Genetics! - . key learning: genetics in animal science. unit eq: why is an understanding of genetics important in the

The Genetics of Viruses and Prokaryotes - . probing the nature of genes. prokaryotes and viruses have advantages for the

Genetics - . to understand population genetics and evolution, we’ll begin with a brief review of mendelian genetics

FUNDAMENTALS OF GENETICS - . chapter 8. genetics. genetics is a field of biology that is devoted to understanding how

Introduction to Genetics - . what is genetics?. the second-most interesting subject in the world. second to what?!