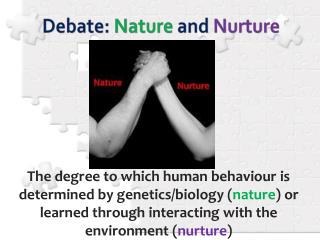 Debate: Nature and Nurture. The degree to which human behaviour is determined by genetics/biology ( nature ) or learned through interacting with the environment ( nurture ). Aims of lesson. To understand what is meant by the nature-nurture debate and to identify the main assumptions . “Major” debates in Psychology - . nature nurture. learning objectives. to introduce the nature and nurture debate to

Introduction - . physical growth &amp; development. introduction. the totality of man what makes us what we are ?

Epigenetics and the brain; the nature of nurture? - . anthony isles behavioural genetics group cardiff university. what

Ch. 3 Nature Nurture - Today's coming attractions:. how much of your behavior is biology, how you were raised, or the

Developmental Psychology - . a life of change. research focus . nature vs. nurture how do genetic inheritance (nature)

Socializing the Individual - . chap. 5. personality. the sum total of behaviors, attitudes, beliefs and values that are

Nature of the Input - . dana hughes. what is the nature of input in regards to language acquisition?. introduction. a

Genetics &amp; Nature vs. Nurture - . genetics. heredity – the genetic transmission of traits from parents to

Thinking about Nature - Nurture - . do you think people should be screened before they can have babies? what

EQ 4: What is the difference between nature and nurture - . br: on handout. is personality formed by heredity (genes) or

Using Nature to Nurture MFL - . disclaimer. low-tech ideas. engage student interest. i could have done that.