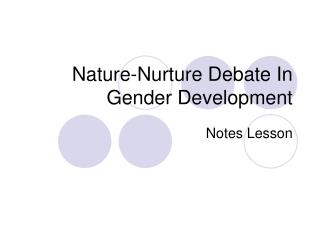 Nature-Nurture Debate In Gender Development. Notes Lesson. The Nature Argument. The nature debate states that gender is biological. This explains the strong relationship between a person’s sex and gender. Nature Nurture Debate - . it all began with galton www.biol.unipr.it/aai/galleria/galton.gif. nature versus nurture

The Nature-Nurture Debate - . leslie price 1/29/08. what is the nature-nurture debate?. the question of whether a

Gender and nature/nurture - . nature vs. nurture gender development. the nature-nurture debate is a debate about the

Nature via nurture - . mistaking the problem?. matt ridley, nature via