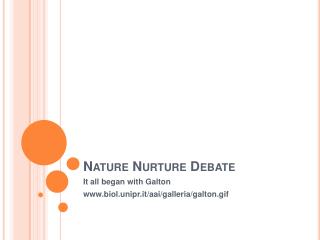 Nature Nurture Debate. It all began with Galton www.biol.unipr.it/aai/galleria/galton.gif. nature versus nurture debate a classic controversy . No clear conclusion to the dispute Many hypotheses Overwhelming evidence has been found in the favour of both hypotheses Nature argues that: The Nature-Nurture Debate - . leslie price 1/29/08. what is the nature-nurture debate?. the question of whether a

Nature via nurture - . mistaking the problem?. matt ridley, nature via

Nature vs Nurture - . list characteristics ( biopotential ) that you have inherited from your parents in the format of

Nature vs. Nurture - . does the environment affect the traits of an organism ?. fill it in …. nature =