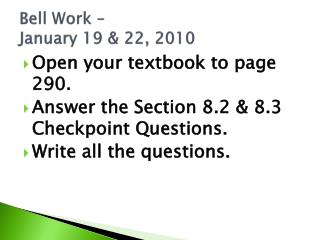 Lecture 5,6 January 15, 2010 - . nature of the chemical bond with applications to catalysis, materials science,

Bell work - . do you think energy in the form of work would be needed to go towards the positive charge or towards the

Educating EACH Child: Strategies that Work! - . prepared for the grade 4 through grade 6 plc of constitution elementary

Bell Work - Pick up the papers on the back counter find your seat work on crime puzzle #4. bell work. why does mr.

Bell Work 4/15/2013 - . get ready for a presentation! what have other people done with trash to make art? ready looks

Bell-work 11/1/12 - . looking at chart on page 146 answer: which nation faced huge expenses after the war? what happened

Motion and Forces - . work and energy chapter 4. bell work 2/22/11 . write each statement, then decide if the statement