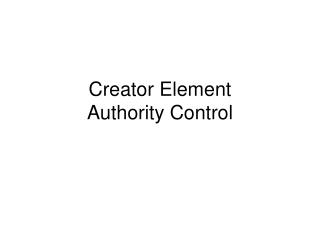 Creator Element Authority Control. Garbage In, Garbage Out: Input Standards and Metadata. Scheme is only half of the equation Consistency is key Controlled vocabulary for all Subjects Names Common descriptive terms. Access Points - Purposes. To identify (e.g., an entity known to the user) Min-Max Heaps - . a double-ended priority queue is a data structure that supports the following operations: inserting an

Element Baby Book Project - . procedure and example modified by k. snyder. introduction. in this project you will adopt

ACCESS CONTROL - . the most fundamental element of information security is to ensure that only those who have a specific

SACO (The Subject Authority Component of the PCC): - An introduction and discussion of mcgill’s experience karen

Percentage Composition - Law of multiple proportions : if two elements combine to form more than one compound, the

GENESIS - . part four book of beginnings god as creator man made in god’s image (“i am”, omniscient, creator, work,

Arrays in Java - . an array is a collection of elements where each element is the same type. element type can be

ELEMENT - . there are 108 elements in nature. structure of an atom. atoms are the smallest particle of an element that