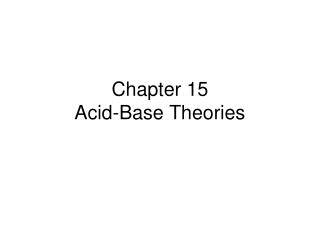 Chapter 15 Acid-Base Theories. Properties of Acids and Bases. Acids Give foods a tart or sour taste What acidic foods might you eat? Aqueous solutions of acids are electrolytes Conduct Electricity Some are strong electrolytes (strong acids) Some are weak electrolytes (weak acids) Acid-Base Theories - . and much more. arrhenius theory. an acid is a substance that produces h+ ions in solution. a base

Acid-Base Theories - . objectives: compare and contrast acids and bases as defined by the theories of: a) arrhenius, b)

Acid-Base theories - . an introduction. properties of acids and bases. acids: taste sour or tart react with some metals

Chapter 15 Acid-Base Equilibria - . 15.1 – the common ion. sometimes adding a salt adds an ion that was present in a

Acid –Base Theories 19.1 - . a. acids. describing an acid. tastes “sour” common compound in fruits and vegetables