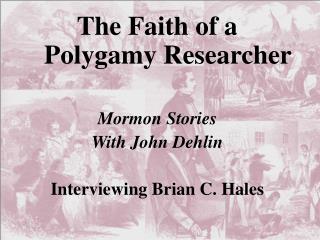 The Faith of a Polygamy Researcher Mormon Stories With John Dehlin Interviewing Brian C. Hales. During our second interview, your questions demonstrated to me that, despite the new evidences and observations regarding Joseph Smith’s polygamy…. Faith is still required. TWO STORIES OF FAITH - . by becky kew published at www.gospelhall.org. a man named jairus had a very sick daughter.

Polygamy - . polygamy is illegal in the united states and in european countries. however, it is legal --even preferred--

The Book of Mormon - . www.kevinhinckley.com. lesson #1. what is the purpose of the book of mormon?. the lost 116 pages.

The Book of Mormon - . 2 nephi 26-30 nephi prophesies and counsels. 2 ne 25 prophesied of the destruction and scattering

The Book of Mormon - . www.kevinhinckley.com. honesty. in a trial, a southern small-town prosecuting attorney

The Book of Mormon - . 2 nephi 26-30 nephi prophesies and counsels. 2 ne 25 prophesied of the destruction and

Sharing faith in stories - . we tell our stories of faith to all (we embody our stories) insiders hear and are changed

Escaping Polygamy - . the information shared is by permission of all parties. . what is holding out help?. to assist