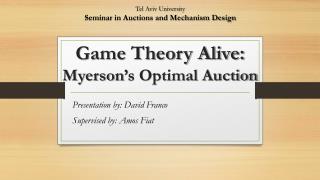 Game Theory - Game theory was developed by john von neumann and oscar morgenstern in 1944 - economists! one of the

Algorithmic Game Theory and Internet Computing - Algorithms for the linear case, and beyond …. algorithmic game theory

Game Theory - . 6/3/10. basic concepts. in a strategic setting, a person may not always have an obvious choice of what is

UNIT I: Theory of the Consumer - . introduction: what is microeconomics? theory of the consumer individual &amp;