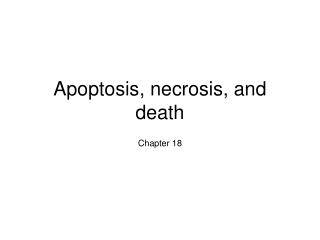 Apoptosis, necrosis, and death Chapter 18 Continuity of life Only from existing cells come new cells. We are all decedents of the first cells on the planet. A cell reproduces by duplicating its contents and then dividing into two This cycle of events is known as the cell cycle

The Regulation of Cell Death: APOPTOSIS - . presented by: jesse kemp. introduction and overview. death due to external

AKT and Apoptosis - . aimee catherine mclean may 12, 2003. outline. introduction: what and why the pathway: overview and