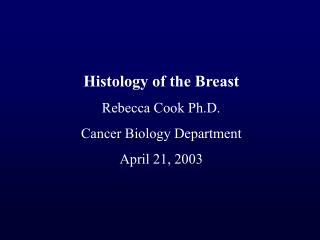 April 29, 2014 Sharon Vaughn, Ph.D. Rebecca Zumeta, Ph.D. - So what do i do now? strategies for intensifying intervention

THE BIOLOGY OF CANCER - . a group of diseases identified by uncontrolled cell growth and proliferation. normal cell

THE REGISTRATION OF BREAST CANCER - 2. five facts about breast cancer. incidence:1 in 9 women in the tcr area develop

THE REGISTRATION OF BREAST CANCER - The anatomy of the breast, the pathology and treatment of breast cancer, and

Breast Cancer - Casey and tabitha what is it? breast cancer is a cancerous tumor that starts from cells of the breast.