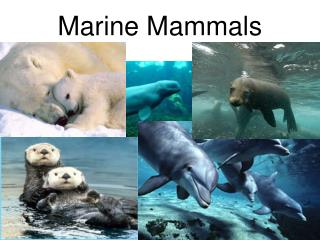 Marine Mammals. What is a Mammal?. Mammals have a 4 chambered heart. Mammals are warm-blooded. They have hair/fur. Have mammary glands. Give birth to live young. Pinnepeds. Pinnepeds are marine mammals that have flippers and blubber, that need to breed on land.

Marine Mammal Protection Act of 1972 - . by: madeline rathle and peyton domning. what is the marine mammal protection

Marine Mammal Protection Act of 1972 - . haley jenkins pd1. what it

Anthropogenic Sound Effects on Marine Mammals “ How is the U.S. Navy Involved ?” - . anthropogenic sound effects on

Marine Mammal Toxicology - . a global and public health perspective. the science of the total environment, 106 (1991)