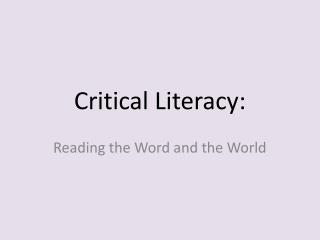 Critical Literacy:. Reading the Word and the World. Raising Our Critical Consciousness. “ Reading does not consist merely of decoding the written word of language; rather, it is preceded by and intertwined with knowledge of the world.” ( Freire & Macedo , 1987, 29). Information Literacy: Reflections on How the Brain Learns to Think Critically - Tami robinson whitworth university we

Literacy for life - . the 2006 education for all global monitoring report. london, 9 november 2005. why literacy?.

Literacy - . iowa core implementation network february 2013. today’s purposes. as a result of our work today, you will