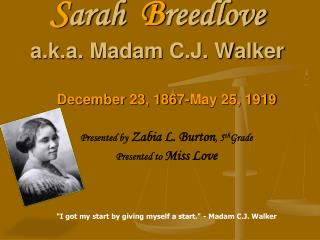 Sarah Breedlove Walker - . danielle eliopulos. sarah walker biography. she was born in delta, louisiana. she was the So You Want to be an Inventor? - . harcourt lesson 16 day 1 students need: a partner, a dry erase paddle and marker,

Chelsea Walker - . all about me!. hometown and education. i lived in collegeville, pa it is about 15 minutes away from

Alice Walker and “Everyday Use” - . alice walker born in 1944 in georgia, is best known for her novels and short