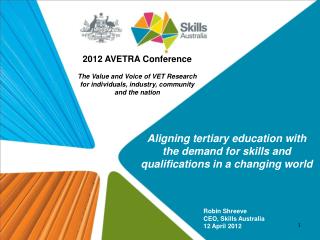 2012 AVETRA Conference The Value and Voice of VET Research for individuals, industry, community and the nation. Aligning tertiary education with the demand for skills and qualifications in a changing world. Robin Shreeve CEO, Skills Australia 12 April 2012. What is Skills Australia?. Australia CEO Mailing List - We provide you with fresh and updated data for your marketing campaigns. while we have