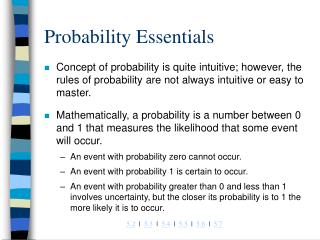 essentials - . community. essentials: community. in community we teach 14 i myself am convinced, my brothers, that

PROBABILITY - . conditional probability. random variable. a variable defined on a sample space. fx: the value of a card.

Probability - . the chance of an event occurring. symbol: p(x). probability experiment. a chance process that leads to

Probability - . an example to consider. say i take a quarter and one of the two dice (what is known as one die) that i