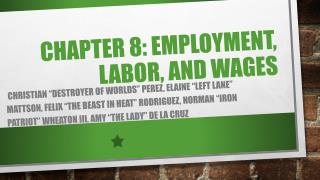 Chapter 29 - . labor demand and supply. when the trucking industry experienced an expansion at the end of the 2001

Minimum Wages and Conditions of Employment for Farm Workers - . modified by the ga agriculture education curriculum

Working in America - Employment, labor and wages. working in america. labor market. “labor” refers to people with all

Chapter 6 Aggregate Supply: Wages, Prices, and Unemployment - . introduction. develop the as side of the economy and