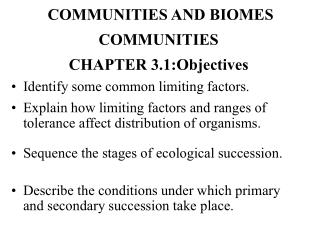 Limiting factors - . def : any environmental factor (whether abiotic or biotic) that restricts the existence, numbers,

Limiting Factors - . chapter 10.2. limiting factors . is an environmental factor that causes a population to stop

Topic: Limiting Factors - . essential question: what do organisms depend on and compete for in an ecosystem?. topic:

How to Identify Limiting Beliefts? - Do you know identifying limiting beliefs can give you chance to win in your life.

Limiting Factors in Usability - . to users, it's still the basics that count!. who??? jack bellis. or any