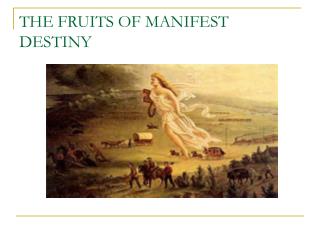 THE FRUITS OF MANIFEST DESTINY THE FRUITS OF MANIFEST DESTINY. 1840s: Slavery moved to the center stage of American politics. It did so not in the moral language or with the immediatist program of abolitionism, but as a result of the nation’s territorial expansion.

THE FRUITS OF MANIFEST DESTINY

Western Expansion and the American Indian Experience - . manifest destiny. what is destiny? define it in your own words.

The Beginnings of Humanity - . 6 million years ago - ardipithecus. located in east africa climbed trees (4 limbs) and

Manifest Destiny - . the belief that america should spread from coast to coast!. “manifest destiny”. belief that the

Manifest Destiny - . by pierson swanger 4 th period. manifest destiny . the belief that the united states should have the

FROM ISOLATION TO EMPIRE - . chapter 22 (586-609). isolation or imperialism?. since its beginning america had been

MANIFEST DESTINY Pt II: IMPERIALISM OR EXPANSIONISM - . can you explain the reasons why the u.s. expanded its territory?

“A House Divided” - . american studies i (honors) mr. calella. part i. “the bitter fruits of war”. the wilmot