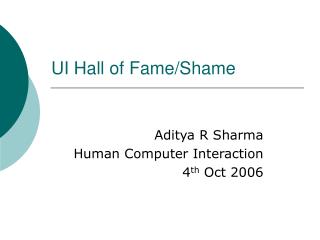 Hall of Fame/Shame - By: brian williams sony nv-u73t sony nv-u73t easy to use easy memorability- it is easy to remember

Hall of Fame/Shame - . zahra ashktorab, lbsc795. what is picnik.com?. an online photo editor that allows you to:. home

Hall of Fame / Shame - . thomas lesch. hall of fame. worst website of all time www.bellads.info so many different things

UI Hall of Fame or Hall of Shame? - . ui hall of shame!. how do you cancel?. human-computer interaction (hci). human the

Title of Powerpoint Presentation - . presentation title. points one two three a b