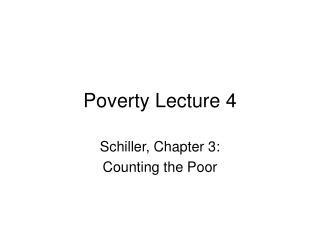 Poverty Lecture 4 Schiller, Chapter 3: Counting the Poor Broad Outline, Chapter 3 Poverty: Drawing A Line--where should the line separating the poor from the nonpoor be drawn? The Absolute Approach (p. 37) The Relative Approach (p. 39) The Fuchs Point Whose Standard?