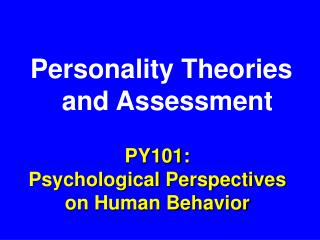 PY101: Psychological Perspectives on Human Behavior. Personality Theories and Assessment. How do psychologists define and use the concept of “personality”?.

7 Perspectives of Psychology - . different theoretical approaches to understand and explain why people behave and think

THEORIES OF SUICIDE - . dr saman yousuf. 14 june 2011. perspectives. biological - to understand how cause of suicide

Chapter 1: Thinking Critically with Psychological Science - . naturalistic observations are conducted in order to:. a.

PSYCHOLOGICAL DISORDERS - . the medical model- an advantage “abnormal behavior/mental illness is a disease” prior to

Perspectives on Psychological Stressors and Psychosocial Support - . hannah peters based on ma thesis 2011. why is this