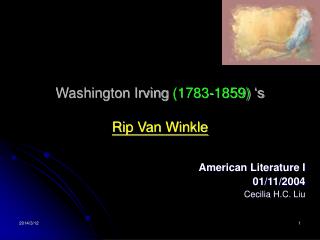 Chapter 7: From Nationalism to sectionalism - . big picture: the war of 1812 filled americans with national pride. yet

Washington Irving - . irving was the first american writer to achieve an international literary reputation. he was a

Washington Irving - The man behind the “legend..”. washington irving. biography 1783-1859. named in honour of

Quiz Show - . question and answer samples and techniques. wrote “because i could not stop for death”. wrote “the

Washington Irving - . bio. born in new york in 1783 preferred adventure and dramas to school sent to tarrytown: start of

President Washington - . george washington. one of america’s wealthiest landowners commander-in-chief of the

Washington Irving - The man behind the “legend..”. washington irving. biography 1783-1859. named in honour of

THE WAR OF 1859 - . what was the initial result of the war of 1859? how did the war result in the annexation of northern

“The Legend of Sleepy Hollow” by Washington Irving - . gle 0801.8.1 read and comprehend a variety of works from

The American Revolution: 1776-1783 - . the war is won. vive la france. critical point in the war both needing a victory