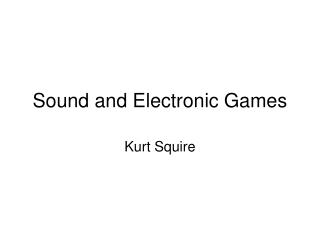 History of Non-Electronic Games - . foundations of game programming. at the end of this lecture, students should:. give a

Recording Sound and Sound Sampling - . an introduction to, and history of…. vocabulary. input overload – sending too

Sound Advice About Games That Anyone Can Use - There are plenty of games to select from these days. it can be a really

Waves and Sound - Wave vocabulary. wave: a traveling disturbance carrying energy from one place to another.transverse

Waves and Sound - . work. to move an object we must do work work is calculated as the force applied to the object through

Sound and Hearing - . lesson 8.1 god’s design for the human body. objective: students will identify the five senses and