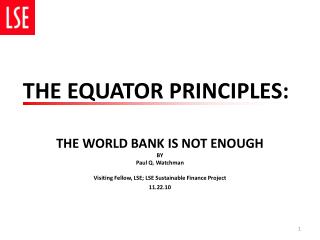 LSE Library Vision for the Future

Sorry Is Not Enough - . is sorrow for sin repentance? 2 cor. 7:8-9. compare the remorse of judas to the repentance of

LSE impact of social science project - . when civil society refers to academic research its uses it . .

TasP is not enough - . stipulated that tasp is effective in reducing infectiousness of the treated person but much more

LSE Challenge Future Team - . problem. education is boring. people do not learn what they want and need , but what

Howard Davies Director, LSE - With the benefit of hindsight… lessons from the credit crisis for banks, regulators and

Howard Davies Director, LSE - Regulating the financial markets: lessons, challenges, and prospects in the aftermath of