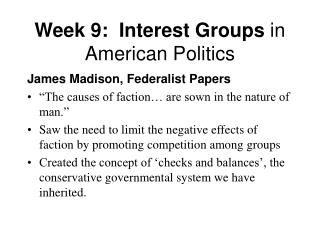 Week 9: Interest Groups in American Politics James Madison, Federalist Papers “The causes of faction… are sown in the nature of man.” Saw the need to limit the negative effects of faction by promoting competition among groups

Week 9 - . what you need to know:. discovering computers: ch 9 communication and networks. what components are required

Week-9 - . distribution networks and fiber components. introduction. we have discussed so far unidirectional and point to

Week 9 - . accounting for leases. learning objectives. upon completing this topic you should have be able to: understand

Week 9 - . coal. things missed last week. show a map of your #6 coal and areas where you will have to cut roof rock

Week 9 - . has there ever been a time in your life when you felt isolated, lonely, or discouraged? what caused it? did

Week 9 - . the challenge of new behaviors a look at the behaviorist perspective. announcements. thank you anna and

Week 9 - Brief assignment 6: analyzing visuals . week 9. visuals. today, we live in a world of words and visuals , in

WEEK 9 - . trigonometric functions right triangle trigonometry. objectives. at the end of this session , you will be able