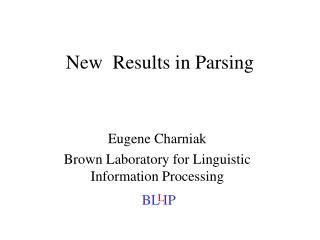 Results Based Accountability Basics A One Day Presentation - . standard training slides sponsored by the ministry of

Lexical Analysis - . why split it from parsing? simplifies design parsers with whitespace and comments are more awkward

Trees, Grammars, and Parsing - . most slides are taken or adapted from slides by chris manning dan klein. parse trees.

Seven50 Preliminary Survey Results - . survey results weeks 1-3 . question 1. what are in your opinion, the most

Introduction to SAX: a standard interface for event-based XML parsing - . cheng-chia chen. what is an event-based