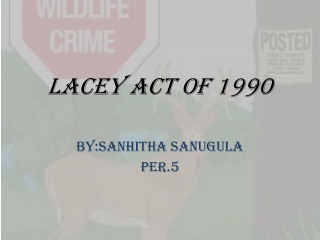 Lacey Act of 1990. By:Sanhitha Sanugula Per.5. Function/International Influence. The Lacey Act now stands as one of the broadest and most comprehensive forces in the federal arsenal to combat wildlife crime. LACEY ACT - . what is the lacey act?. protecting both plants and wildlife by creating civil and criminal penalties for a

Lacey Act - . united states department of agriculture. objectives. give a brief background on the lacey act summarize the

Lacey Act of 1900 - . lacey act is a conservation law, that protects both plants and wildlife by implementing a series of

Lacey Act of 1900 - . prohibits transporting live/dead wild animals or their parts across state borders w/out federal

The Lacey Act - . the lacey act. the purpose of the lacey act is to prevent trade in wood products made from illegally

The Lacey Act 1900 - It was also concerned with the potential problems of the introduction of non-native, or exotic

Companies Act 1990 - . next slide. purpose. this act outlines the procedures to be followed, when setting up, running and

Broadcasting Act 1990 - . the purpose of the act was change and reform the structure of british broadcasting. it led to

Industrial Relations Act 1990 - Next slide what is the difference in an employer and an employee? employer is a person

Industrial Relations Act 1990 - . next slide. what is the difference in an employer and an employee?. employer is a