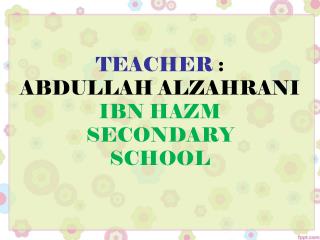 MODULE 2 Secondary A Year in the Life of a Data Driven School - . welcome back!. outcomes. participants will understand

welcome - . we are very happy to see you among us. private namık tanık secondary school. we love our school very much

A+ny where 4.0 Teacher Training - . what is needed to build a school using a+?. access the log on screen using the url

Teacher Self-Efficacy - . what elements constitute teacher self-efficacy, and what factors are associated with differing

Abbott Secondary Education Initiative - Introduce myself and asei. where it came from? what it says? what some of the