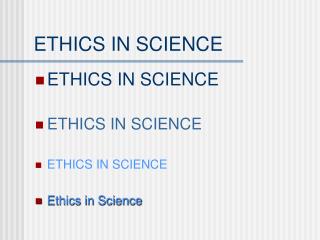 Ethics in science - . scientists are human too. science is a human endeavor. science also requires inspiration,

Science Ethics in ARS - . research and society. research is built on a foundation of trust. scientists trust that

Ethics in Science A Guide for Future Science Teachers - . supported by: ethics across the curriculum ukleja center for

Genetic Technology Science Ethics - . scenario #1. you’ve found out that the child you (or your wife) carries has the

Ethics and Computer Science - . most of the material for these lectures was taken from an excellent text on the

Ethics in Social Science Research and Experiments - . task:. in small groups of 4, read through the 10 top unethical

The Surprising Science of Ethics - . scott truelove austin energy organization development. in ethics the challenge is