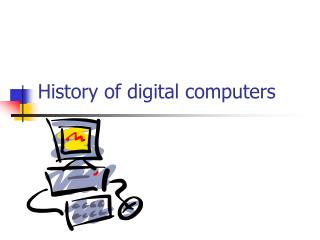 DIVE COMPUTERS 101 - . dive computers 101 is designed to provide divers with the theory, operation and benefits of

EEL 3801 - . part i computing basics. data representation. digital computers are binary in nature. they operate only on

History of Typography - (history of digital font) robin chin november 7, 2006 what is “typography?” the art and

A Brief History of the Internet - . internet: the early years …. the proliferation of lans engineers have devised many

Chapter 1: Introduction to the World of Computers - . learning objectives. explain why it is essential to learn about