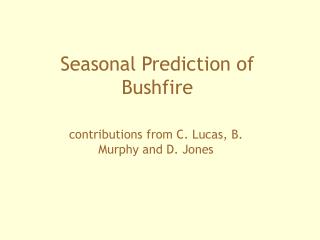 Seasonal Prediction of Bushfire. contributions from C. Lucas, B. Murphy and D. Jones. SBAW. Current effort has been underway since 2006. Approaching the 4 th round of workshops. Separate efforts for the northern and southern portions of the country