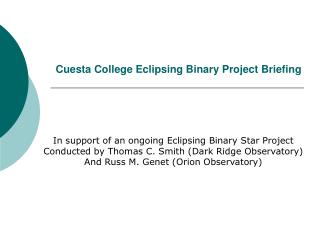 Cuesta College ARCC Data - . report to the san luis obispo community college district board of trustees may 5, 2010. what

Eclipsing Binaries - . if the binary stars are eclipsing, then it is guaranteed that we are in the orbital plane. this