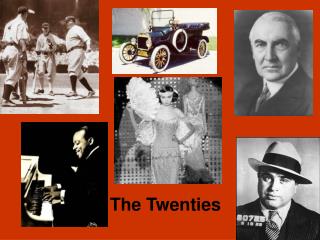 The Twenties. Post-War America. 1919 – returning veterans have difficulty finding work; US disillusioned in aftermath of the War Most wanted to return to “normalcy”, rejected both internationalism and progressivism Biggest problem: lack of jobs. The Red Scare.

Man Drought: The Ratio of Men to Women in Australia - The so-called “man drought” is an expression that has been used

The Twenties - . birth of the modern. postwar developments at home. the years after the “war to end all wars” are

Chapter 23 The Twenties - . warren g. harding. republican won election in 1920 “return to normalcy” nothing but

The Roaring Twenties - . factors underlying the prosperity of the 1920’s. introduction. at the end of the 1918, world

THE ROARING TWENTIES - Life &amp; culture in america in the 1920’s. the roaring twenties. changing ways of life.

Chapter 22 THE ROARING TWENTIES - . adjusting to peacetime changes in american society the jazz age the economy of the

THE ROARING TWENTIES and THE GREAT GATSBY - . english 3 – mr. mcgowan. essential questions. how do people in different

The Roaring Twenties A Social History - . nativism the age of invention mass society entertainment the economy. sacco and