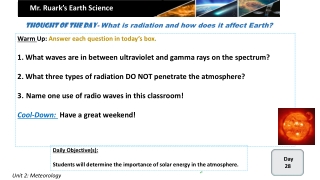 Mr. Ruark’s Earth Science. Thought of the Day- What is radiation and how does it affect Earth?. Warm Up: Answer each question in today’s box. 1. What waves are in between ultraviolet and gamma rays on the spectrum? 2. What three types of radiation DO NOT penetrate the atmosphere? 10 interesting facts about solar energy! - Solar energy is the reason we are alive today; it is the main source of energy